An image of the interior of the refurbished Multihalle (Democratic Umbrella) with an open hall, modular furniture and new rooms underneath the stand, visualisation: COFO+Peña Architects (Rotterdam) with kind permission from the town of Mannheim

A project that lies close to Wilkhahn’s heart has been rescued. Mannheim’s Multihalle, built based on plans by Frei Otto and Carlfried Mutschler for the 1975 German Garden Show almost 45 years ago, will be refurbished. Work on the “world’s largest, self-supporting timber gridshell structure” is scheduled for completion by the next German Garden Show in Mannheim in 2023. In 2018, Wilkhahn hosted a first-class symposium entitled Shaping the Future – Frei Otto’s Cultural Legacy. Wilkhahn organised the symposium to mark the 30th anniversary of the production buildings, designed by Frei Otto, at its headquarters in Bad Münder, Germany. All speaker and attendee fees from the symposium were donated to Multihalle e.V., the association fighting to rescue Mannheim’s Multihalle. The Multihalle was still slated for demolition in 2018 and it took hard work on the part of the association and an exhibition at the Venice Biennale in 2018 before the German government pledged 4.7 million euros from the National Urban Development Projects programme in 2019, with a further 9.2 million euros coming from Mannheim’s town council. 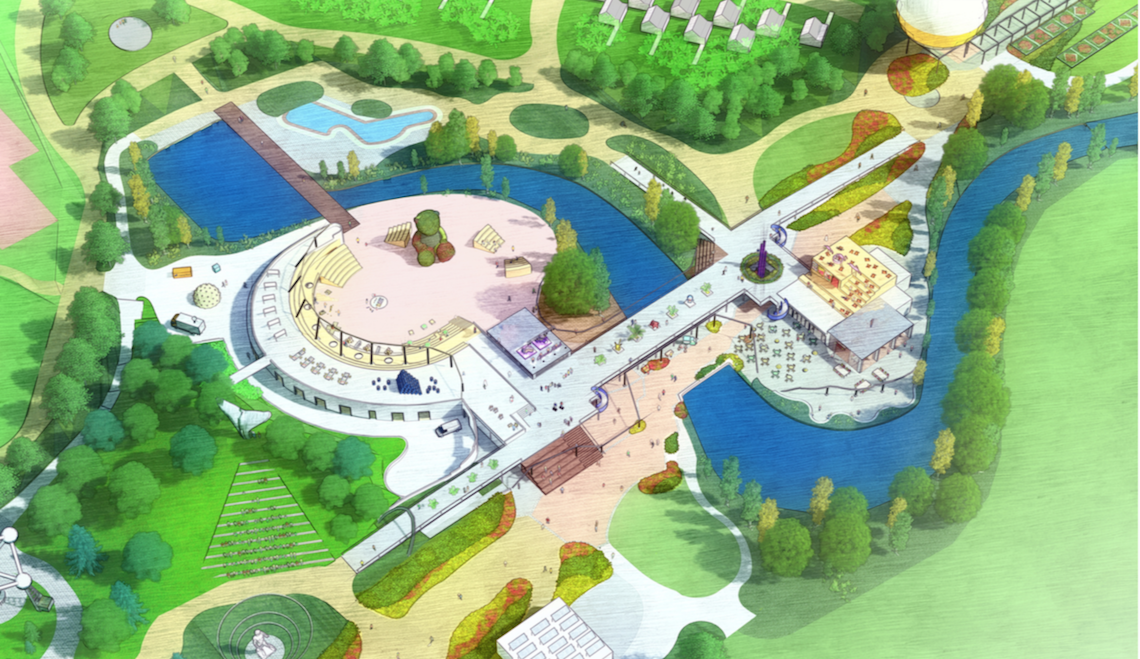 Axonometry (roof not pictured) of the Democratic Umbrella, visualisation: COFO+Peña Architects (Rotterdam), with kind permission from the town of Mannheim.

Mannheim’s spokesperson on cultural buildings, Tatjana Dürr, has more news to report on how the hall, which was originally conceived as a temporary structure, will be used. For phases 1 to 3, the Dutch architect partnership of COFO+Peña has been commissioned to come up with a starter kit enabling the hall to be used all year round. In March 2019, COFO+Peña (Rotterdam) were one of three architectural studios to win first prize in the ideas competition on how the Multihalle could be used in future. In the summer of 2019, the three prizewinning designs from the architects were developed further in a workshop. In autumn 2019, a panel of judges, spearheaded by the director of the German Architecture Museum (DAM), Peter Cachola Schmal, ultimately chose COFO+Peña’s approach from the three revised concepts as the “one with the biggest development potential and the best architectural quality.”

Key visual of the Democratic Umbrella, visualisation: COFO+Peña Architects (Rotterdam), with kind permission from the town of Mannheim

The Dutch architects suggest a multi-phase, modular concept entitled a Hall Allee. A central avenue (or urban ribbon) lies at the core of the design and leads from the town centre through Herzogenried Park (the metropolitan garden) and accommodates a wide range of different places to stop and different activities (called democratic umbrellas). For the Multihalle itself, four elements will become the main catalysts of urban life: the tent/square, platform/stand, slab/atrium and roof/stage. By partially opening up the hall to the elements so that most of it only provides shelter from the wind and rain, exterior and interior spaces are more closely interwoven. Only the existing restaurant, the offices under the currently semi-circular stand and the space below the future stage will be rooms that can be heated.  At the same time, the gradual development of the hall over several years will ensure that the town’s citizens identify with it sustainably. At the same time, changes and construction elements have been designed in such a way that they allow a maximum of functionality and breadth in terms of the activities and events that are possible and range from festivals and shows to conferences and workshops to exhibitions the whole year round.

The design of the interior has been reduced to the max but can be added to if required. The goal is to get people to participate in turning the space into something they accept and like. The goal is to implement the project and refurbish the roof too in time for the German Garden Show (BUGA) in 2023. 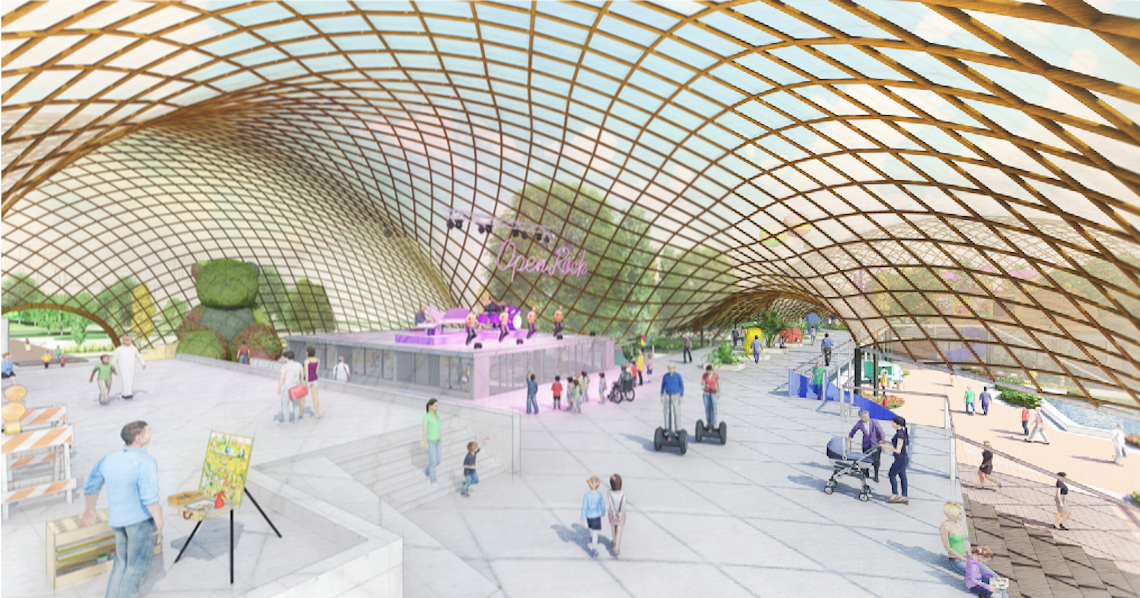 Image of the new stage in the open hall of the Democratic Umbrella, visualisation: COFO+Peña Architects (Rotterdam), with kind permission from the town of Mannheim. 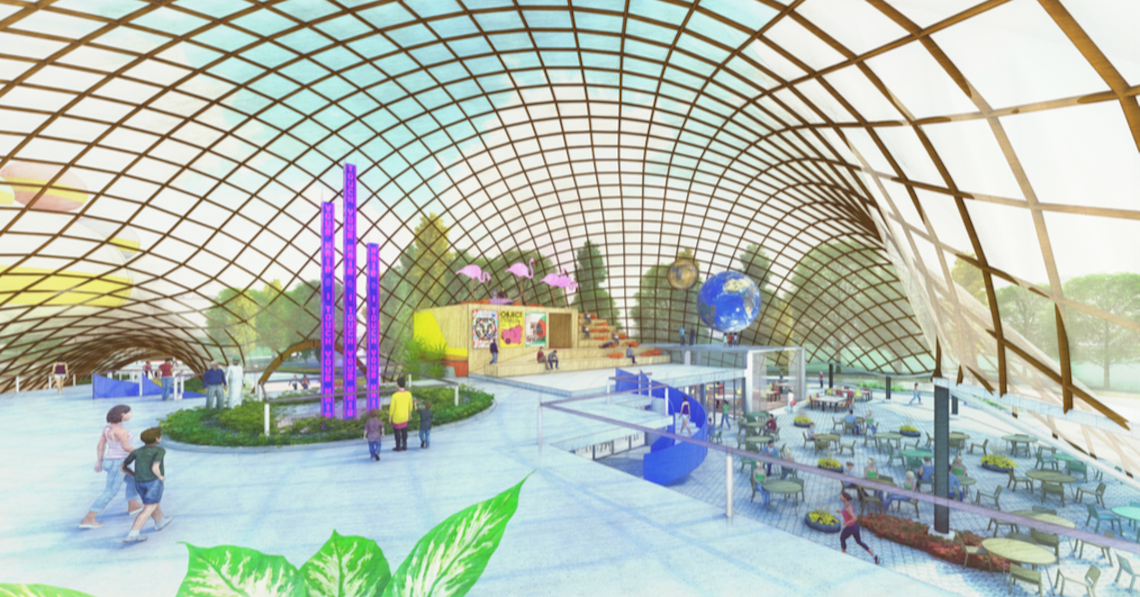 Image of the open hall and restaurant (below right) of the Democratic Umbrella, visualisation: COFO+Peña Architects (Rotterdam), with kind permission from the town of Mannheim

At the beginning of February 2020, Mannheim’s town council also took part in the World Urban Forum. The Multihalle featured there in a short film called The Awakening of a Sleeping Beauty – the Transformation of Mannheim’s Multihalle. The rediscovery of the Multihalle and the participative development of a usage concept were impressive examples of the World Urban Forum’s key theme, namely: How can Processes of Urban Change be Designed through Culture and Innovation?

Image of the hall from the restaurant, visualisation: COFO+Peña Architects (Rotterdam), with kind permission from the town of Mannheim

Image of the hall to the stand, visualisation: COFO+Peña Architects (Rotterdam), with kind permission from the town of Mannheim

Mannheim’s image film about the Multihalle for the 2020 World Urban Forum.