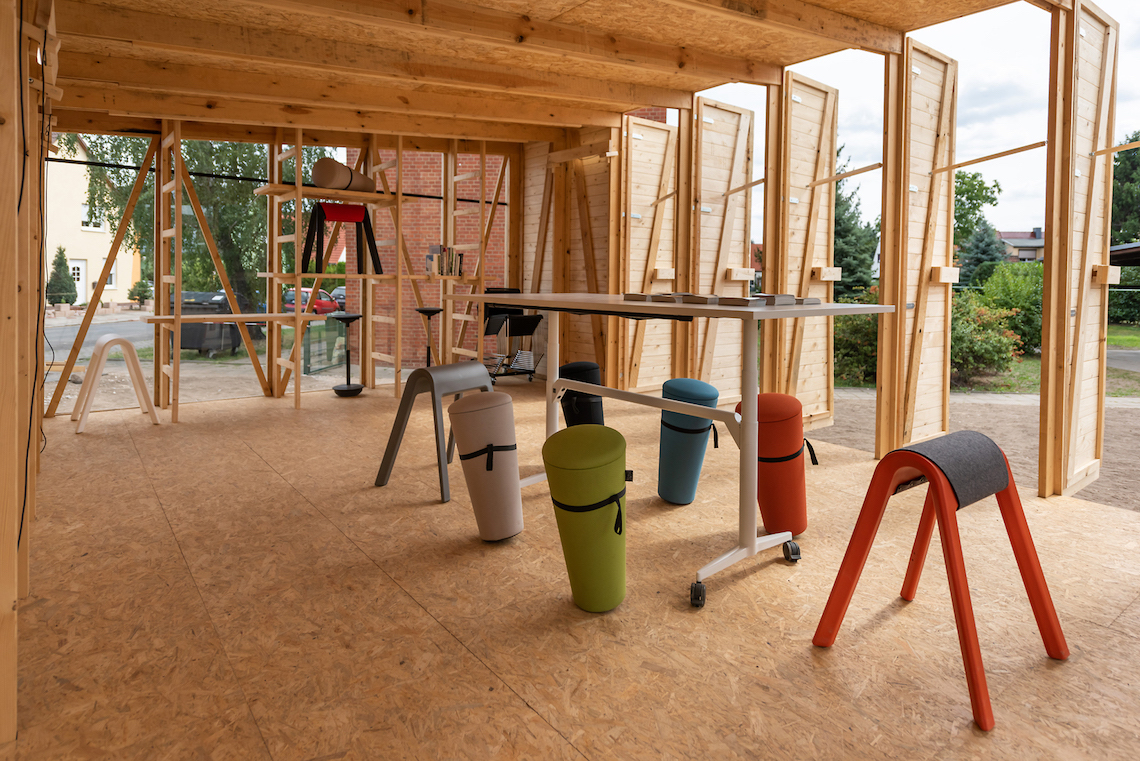 Developing the legacy of modernism isn’t just something office furniture manufacturer Wilkhahn pays lip service to, it’s firmly anchored in the company’s corporate culture. The 2019 Bauhaus centenary also offers Wilkhahn a whole host of cultural opportunities to mark the occasion, ranging from its cantilever chair competition to the Wilkhahn symposium entitled Can a Digitalized World Learn Lessons from the Bauhaus? to lending support to a university design project to construct a Bauhaus building which has never existed before. The structure is an L-shaped, single-story, wooden building. Ludwig Hilberseimer (1885 – 1967) had designed it as a “growing house” in 1930. Based on plans by Bauhaus director Hannes Meyer and Hilberseimer, 400 of these buildings were to be added to the ensemble of Laubengang houses in Dessau-Törten. 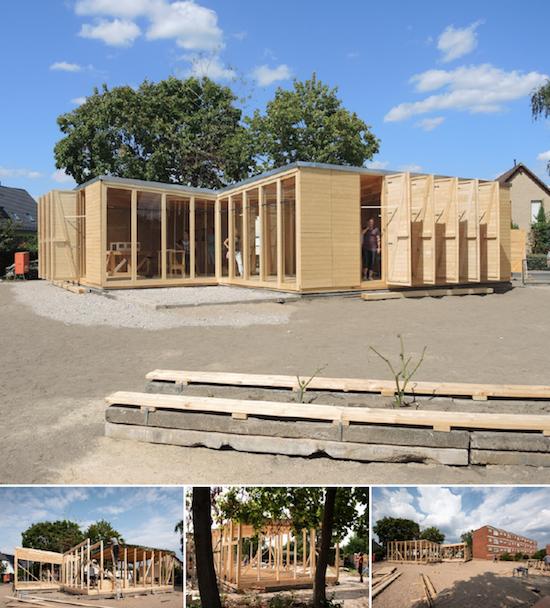 Hannes Meyer – placing the needs of people over those for luxury

The house has now been built in Dessau-Törten at the initiative of Philipp Oswalt, head of the faculty of architectural theory and design at the University of Kassel. The work of Hannes Meyer (1889 – 1954) and its impact is one of the research areas the faculty focuses on. As the second Bauhaus director from 1928 to 1930, Meyer’s new strategy for the Bauhaus was to encourage close collaboration with industry and to set up a construction department at the school. He wanted architecture to be geared to societal needs.

At that time, the Laubengang houses were not only planned in the Bauhaus’s construction department, but, with the help of the Bauhaus students, also actually built. The buildings have had World Heritage Site status since 2017. However, the economic and political crisis that began in 1929 prevented the construction of the additional low-rise wooden buildings. Only one was produced for the exhibition on the “growing house” in Berlin in 1932. “Today, the Bauhaus’s most innovative contribution to housing construction by far has almost been forgotten,” says Oswalt, who also headed the Bauhaus Dessau Foundation from 2009 to 2014. “Especially since it doesn’t match the usual Bauhaus cliché either, in other words, it’s not made of glass, steel and concrete, but just of wood. It’s inexpensive, ecological and can be extended”. 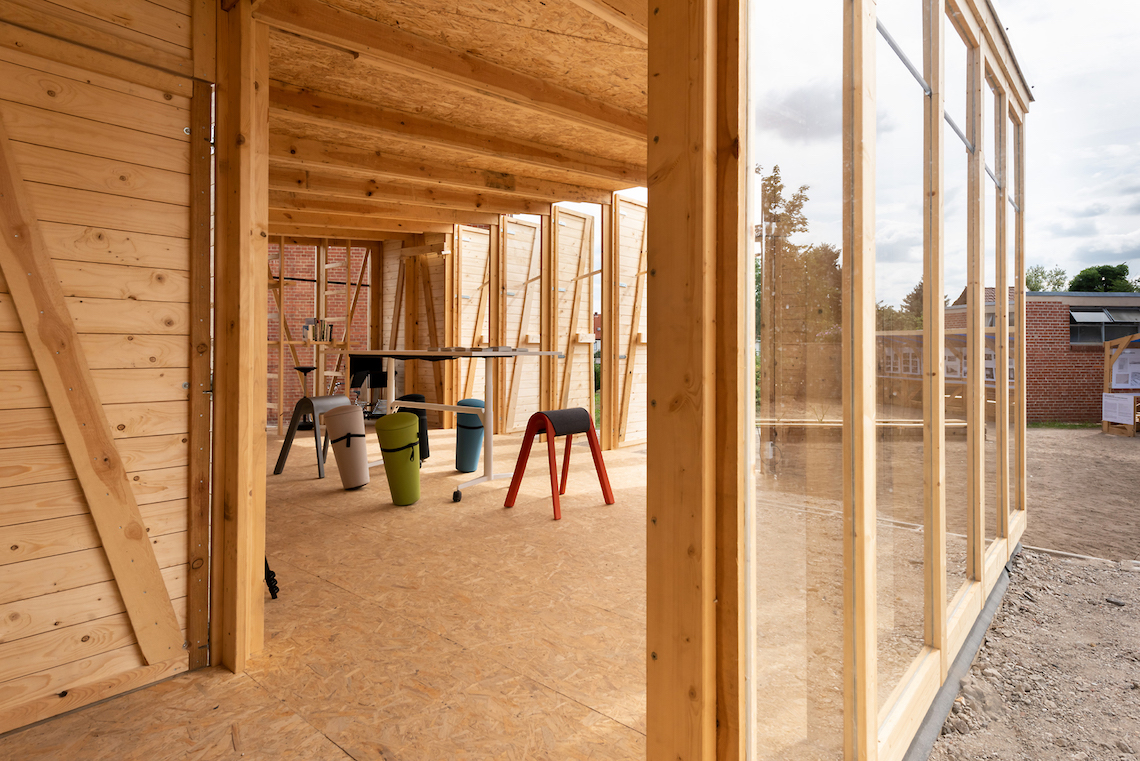 Over the past three weeks, Oswalt erected the “growing house” as design-build-project with students on a vacant urban site (Mittelbreite 12) right next to one of the Laubengang houses. “This is the first time that the innovative urban-development concept has been made clear and the equally impressive Hilberseimer house type has been presented. We’re correcting the somewhat one-sided image of the Bauhaus and providing a stimulus for contemporary debate on housing construction. At the same time, this is also an act of recreation in the Bauhaus centenary year,” says Oswalt. 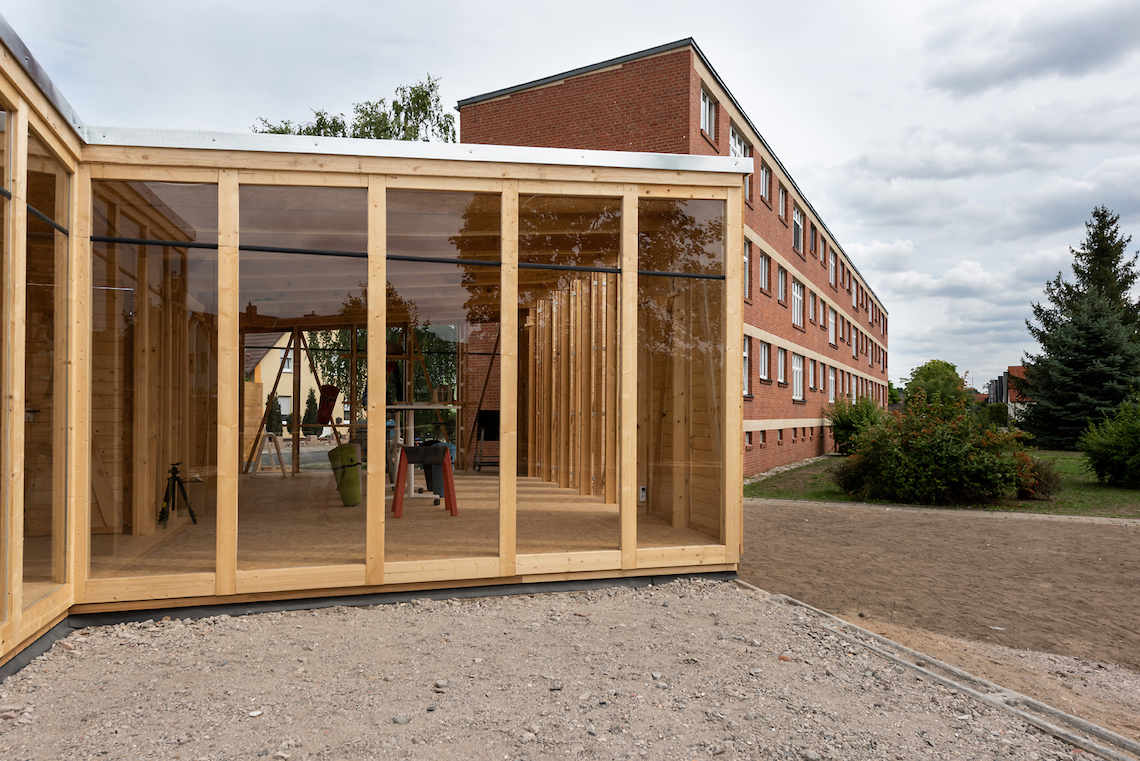 Wilkhahn isn’t just sponsoring the project but also providing the building, which is designed to be a learning hub for different user groups, with an appropriately versatile range of furniture. Students at Walter Gropius School in Dessau deliberated on various ways of using the building, which ranged from a green classroom to a real laboratory for the urban community to an exhibition site and show house. Wilkhahn provides flexible options for these diverse environments, which users can configure themselves. Its Timetable Lift (design: Andreas Störiko) is a battery-operated, height-adjustable, table-cum-whiteboard, which can be written on and folded down. It can be used as a horizontal surface for workshops and meetings as well as a vertical panel for presentations. It’s joined by Stitz (design: ProduktEntwicklung Roericht PER), a movement-fostering stool to perch on and a classic product from the environment of Ulm University of Design, the organization that succeedd the Bauhaus and was a Wilkhahn partner until its closure in 1968. Wilkhahn developed Stitz to encourage people to alternate between standing and sitting and therefore move more while working. And then there’s the lightweight, exceptionally compact, stackable Aline multipurpose chair (design: Andreas Störiko). Its transparent mesh fabric and small skid base give it an understated appeal and sprung comfort. Colorful Stand-up stools (design: Thorsten Franck) and “Sitzbock” pommel horse seats (design: RSW) lend a playful approach to new types of interactions. 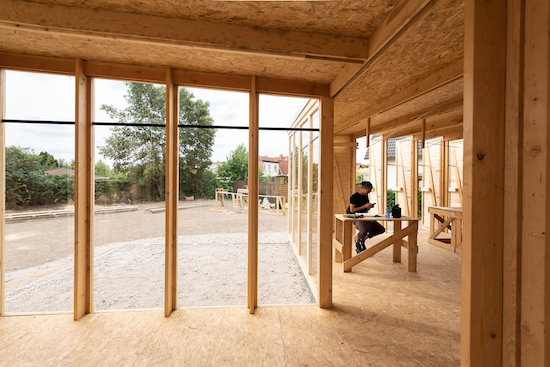 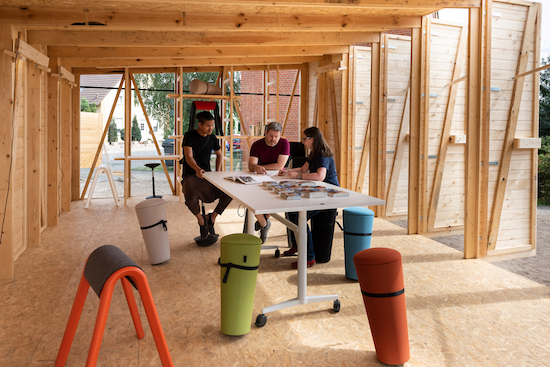 The growing house is to move

The house itself can be dismantled and will move on after 18 months in Dessau. The key was handed over to the organization running the house, Deutscher Werkbund Saxony-Anhalt, at the opening on 11 August 2019. In addition to Oswalt, Prof. Joachim Krausse from Deutscher Werkbund, Dr Robert Reck, Dessau-Rosslau’s deputy for economic and cultural affairs, Nicky Meissner, Wohnungsgenossenschaft Dessau eG’s chairman of the board of directors, and Burkhard Remmers, Wilkhahn’s director of international communications, took part. The house will then move to Berlin-Hohenschönhausen to a site near the Lemke house, which was based on plans drawn up by Mies van der Rohe. Here, Mies had emulated the Hilberseimer building type and turned it into a luxurious version in the shape of a villa. 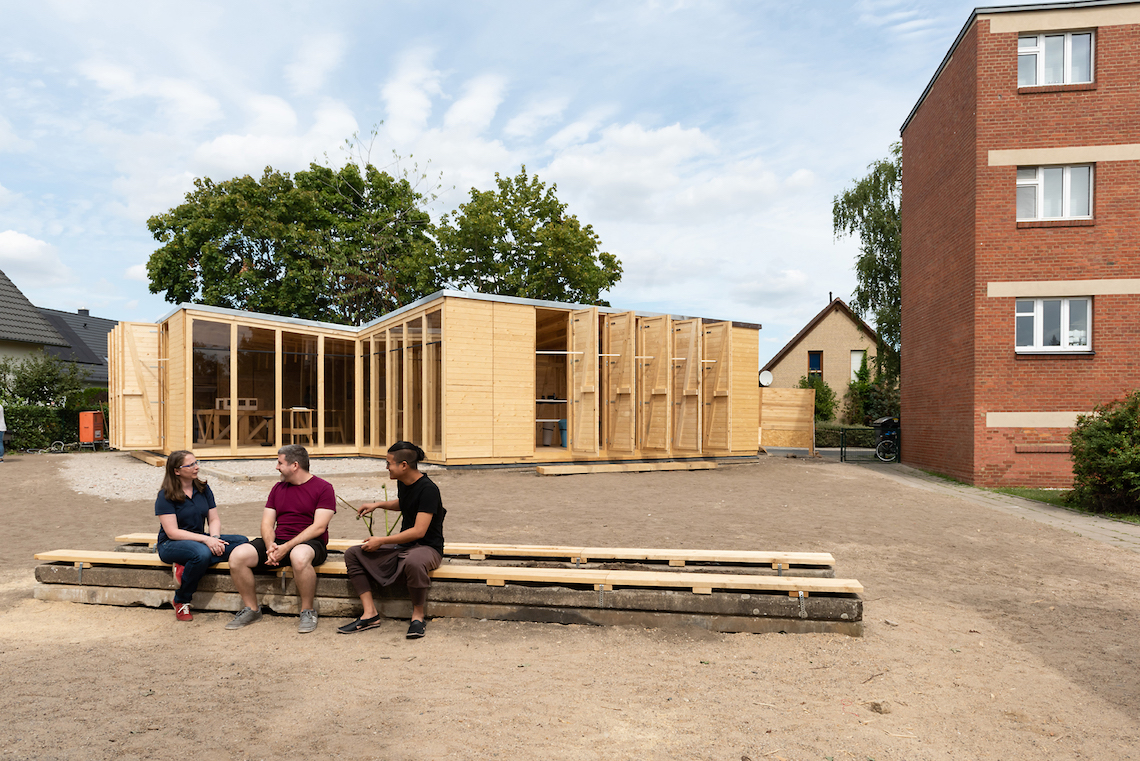 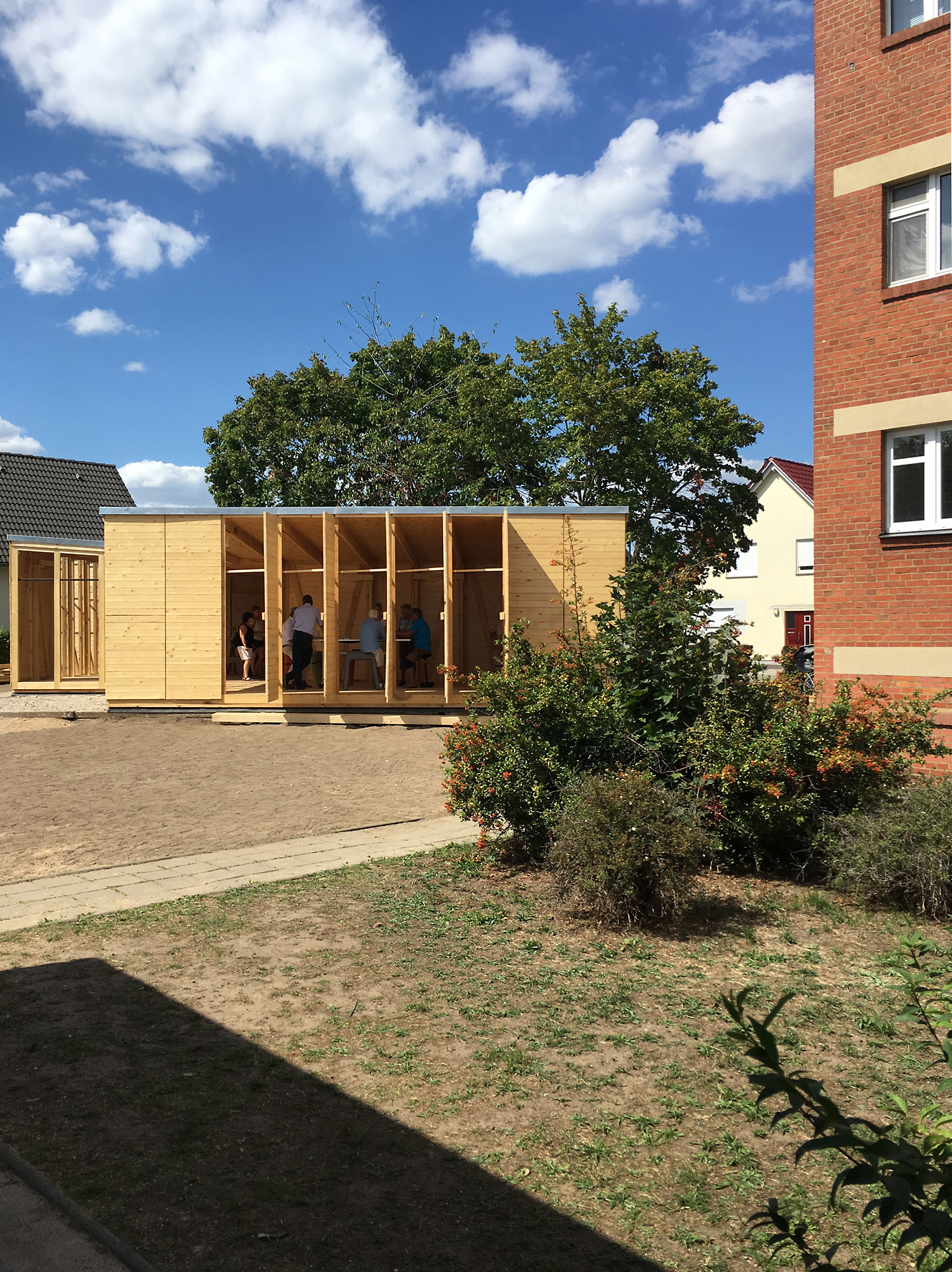 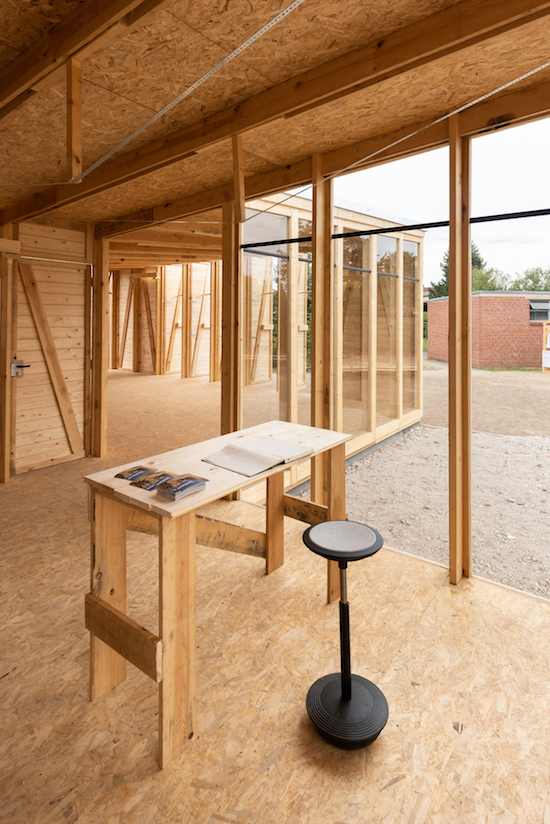 Involved in the project:

The project was planned by the University of Kassel’s architectural theory and design faculty and implemented with the support of Constructlab, a platform for collaborative and experimental constructions. Walter Gropius school students developed usage scenarios, Dessau-Rosslau provided the site, and Anhalt University of Applied Sciences (the international master’s program in design) created the website. The Deutsche Werkbund Saxony-Anhalt agreed to operate the site. 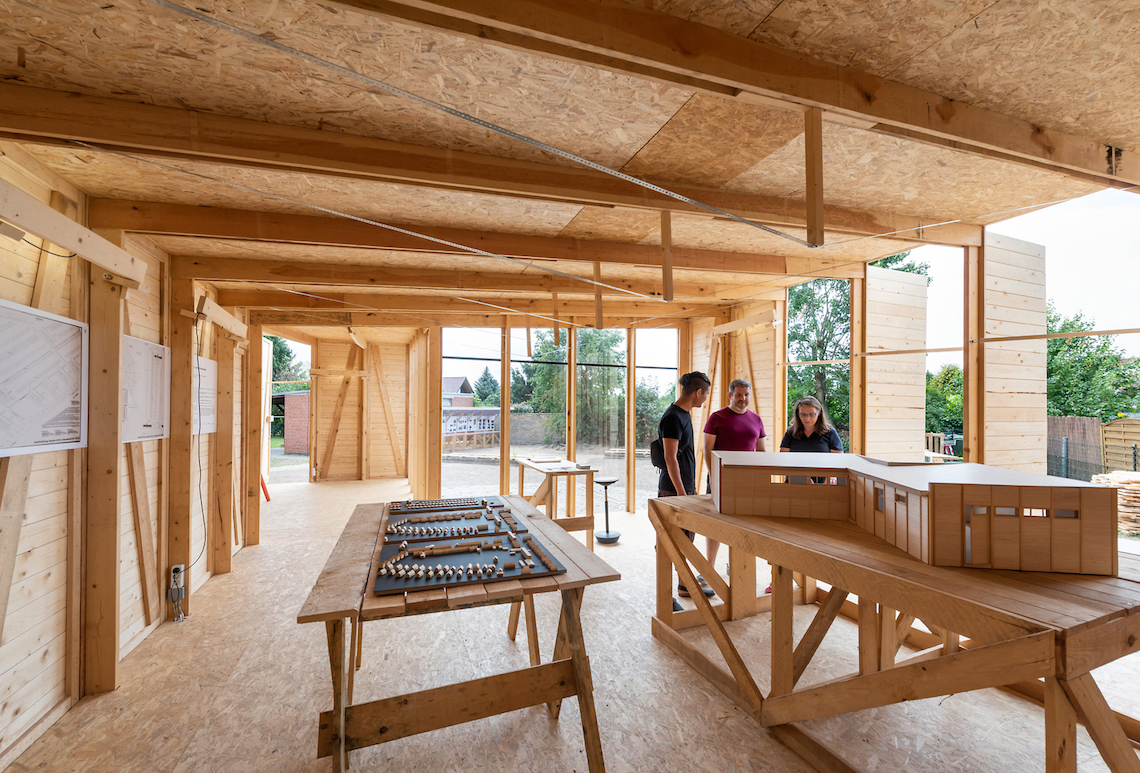 Interior view with model of the original design by Ludwig Hilberseimer (on the right). On the left: urban development models of different chronologic stages of the Laubenganghäuser estate (original Bauhaus planning including „growing houses“, planning during NS era, current state), photograph: Christoph Petras

Link to the Wilkhahn symposium

More about the mobile Timetable Lift

More about the one-legged Stand-up

Further informationen on the design/build project of the University of Kassel: